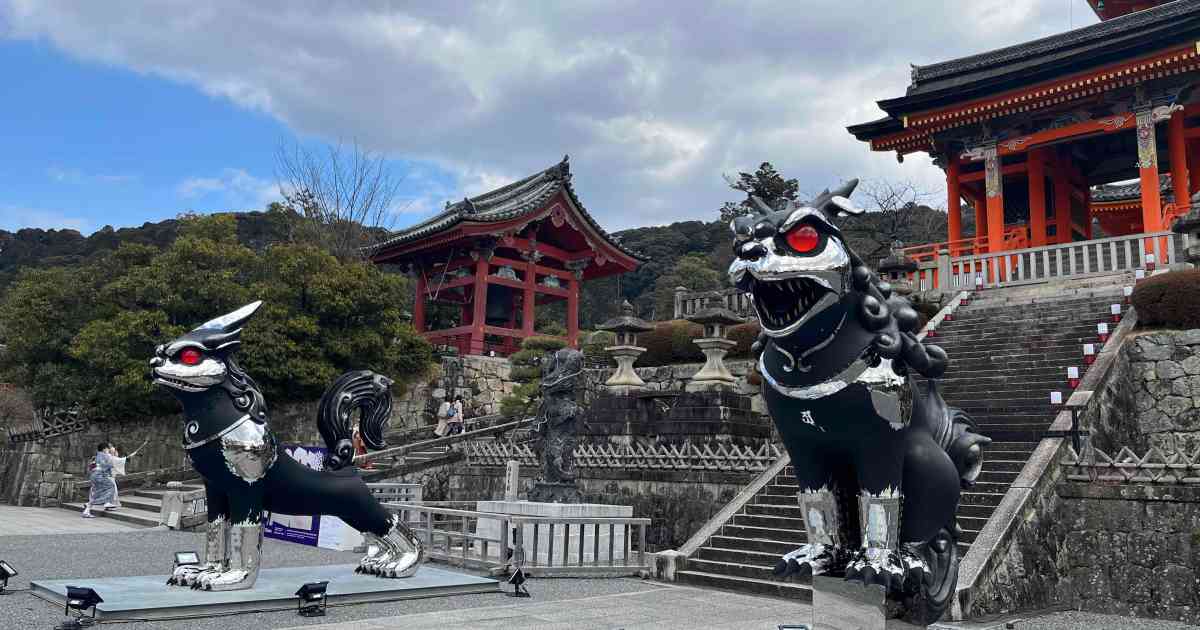 A surprise version of traditional Japan that includes a giant kokeshi doll.

Last week as the sun rose Kiyomizuderaone of Kyoto’s most famous and historic temples, something was a little different.

It was almost as if aliens or time travelers from the future had landed overnight, because there, next to the temple’s main gate, was a giant kokeshi doll.

The main gate of Kiyomizudera, known as the Nio-monis massive – it measures 10 meters (32 ft) in diameter and 14 meters (46 ft) in height – but its giant proportions are shaken when an equally giant kokeshi is laid beside it.

It wasn’t the only mysterious object to land at the temple, as just past the main gate, to the right at the west gate, known as the Sai-monthere was another giant surprise – two brilliant guardians.

Sai-mon, pictured above, is believed to be a gateway to paradise, due to its incredible sunsets. Now this gateway is protected by two komainulike we have never seen before.

The Komainu (known as “lion-dogs” in English) are stone statues that appear in pairs at the entrance to Japanese Shinto shrines, warding off evil spirits with their fierce appearance. However, the komainu standing guard at the stairway leading to Sai-mon are unlike those usually seen at holy sites like this.

▼ These look like mecha komainu that have landed from the future, with their gorgeous matte black glow, shiny silver detailing, and giant red eyes.

▼ These shiny details are even more impressive at night.

Komainu pairs always feature one statue with open mouth and the other with closed mouthand this detail is also what you will find in this futuristic duo.

▼ The open-mouthed komainu is said to pronounce the first letter of the Sanskrit alphabet, “a”…

▼…while the closed mouth komainu pronounces “one”, the last letter of the Sanskrit alphabet.

Together they pronounce “aun”, (“ohm“), the syllable that represents the primordial trinity of Brahma, Vishnu and Shiva.

So why the giant guardians of Kiyomizudera?

Well, it’s all part of Kyoto Artists Fair 2022an annual event that uses the city’s corporate buildings and significant cultural assets as “quirky exhibition spaces” to display the work of local artists.

The giant kokeshi is an inflatable doll created by an artist called Yottaand it also made an appearance at Osaka’s Expo ’70 Memorial Park in 2021.

As for the futuristic Komainu, they were created by a contemporary artist Kenji Yanobe ( @yanobekenji ), who is also a professor at Kyoto University of Art and Design. The stunning pair of lion dogs is a 2019 creation called “KOMAINU ―Guardian Beasts−” and the attention to detail on each is absolutely breathtaking.

▼ This video of the komainu standing guard at the temple shows them in all their glory.

According to Yanobe, the komainu can be perceived as spiritual beasts that protect Buddha, gods and people. This particular pair debuted at Hieizan Enkeiji Temple in 2019, after which they were moved to the Uryuyama Campus of Kyoto University of the Arts, where Yanobe teaches.

Now, during the pandemic and times of global turmoil, the world needs giant guardians like these to watch over them more than ever.

This makes their appearance in Kiyomizudera all the more poignant, and you’ll be able to see them on duty at the site by March 13.

Orbiting robots could help repair and power satellites in space

Is a Russian cyberwar imminent?