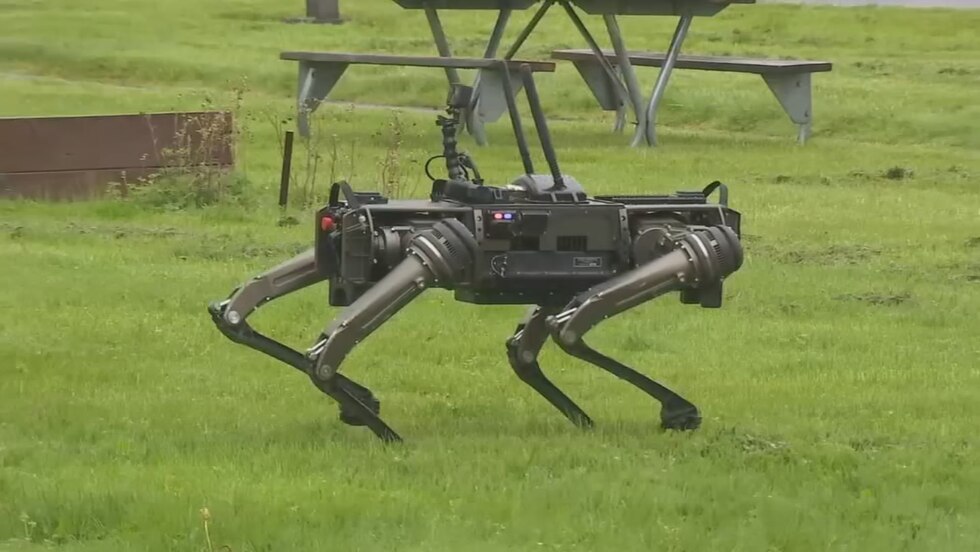 Technical Sargent, Jamie Cuniff says it will help save lives and is excited about what it will bring for the future.

“When I think about the potential we have with this capability, I’m excited about it. If you have a scenario where something is far away, you have an aircraft that doesn’t have the capability to fly and they’re on an airfield in a small town and you have to send people, you can send a dog with them, they can program a route, have the dog walk that route,” says Technical Sargent, Jamie Cuniff.

For now, Rover will roam specific perimeters or areas to provide real-time feedback and help practice responding to threats and incidents. Rover also has thermal capability to identify targets. Cuniff also says it can be used in dangerous situations instead of endangering humans and can help replace 4-5 human bodies.

“You look constantly, you look at the same thing for hours because of this fatigue factor that comes into play. My eyes get tired, some people will look around and see something shiny and they don’t look here, it’s is just very dedicated,” says Cuniff. “You can use it in potential chemical, biological, radiological and nuclear environments of Sieben to send it when you don’t want humans there. Send to buildings if you have a potential threat inside a building to get real-time surveillance video feedback, optionally get a layout of the building Find out where the person or people are.

Rover weighs 100 pounds. and can withstand any kind of weather, but he has his limits but is excited about his future capabilities.

“Object detection with the way I robotize a setup isn’t optimal. So if a truck is parked in the way and I’ll try to drive around it, but not in the most nimble way,” says Cuniff “We will have the ability to engage a person through the dog using a speaker microphone. Whoever is watching them will be able to talk to that person and do an interview in the field without actually being on the If they determine it’s a threat at the same time they send a mobile unit, interact directly with that person.