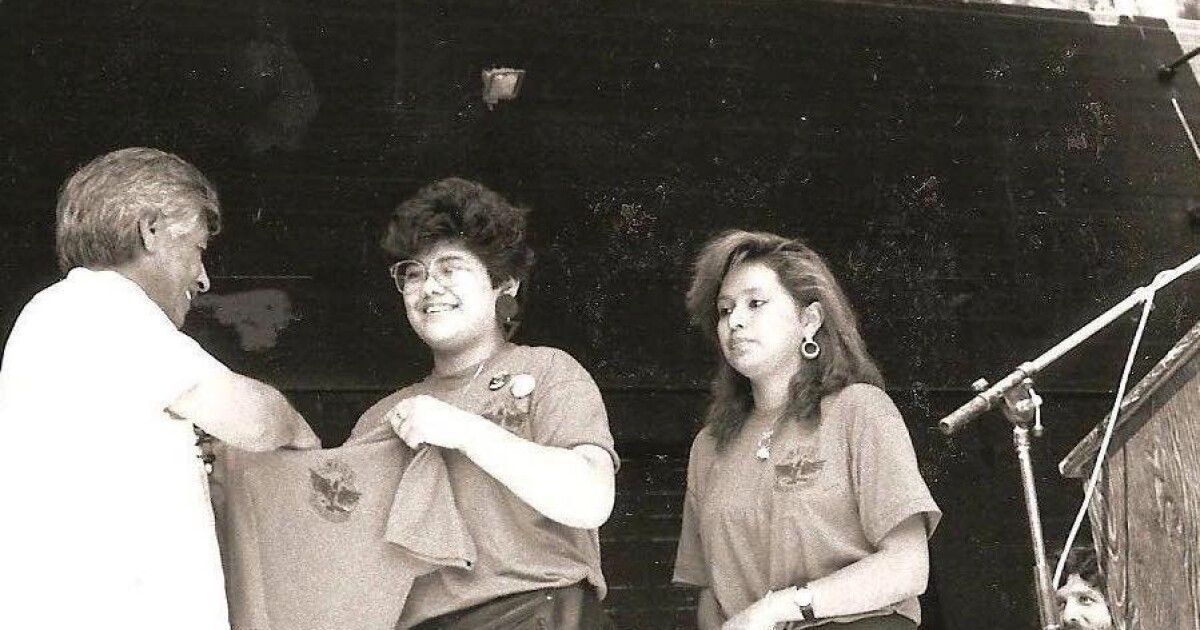 Opinion: Cesar Chavez inspired me to pursue higher education and become an agent of change

Crown is the Director of the Office of Student Equity Programs and Services, Division of Student Affairs, Southwestern Community College District and lives in City Heights.

As a senior at Mount Miguel High School in 1989, I did research for my high school newspaper on Cesar Chavez. I found that farm workers were exposed to aerial spraying in the 1980s with toxic chemicals and pesticides linked to birth defects and childhood cancer. Diving into my story, I heard of a humble Navy veteran who inspired many farmworkers from cultural groups to join their voices for a better workplace, better pay, and affirmation of their identities. cultural.

In the legacy of Cesar Chavez, I found my hope, my voice and my aspirations to become an agent of change. As a first-generation Mexican American high school student, my voice and identity was affirmed with the story of my American hero. I was then inspired to start a Movimiento Estudiantil Chicano de Aztlán (MEChA) high school club at my high school, with my classmate, Rudy Guevarra.

Who would have thought that two high school students from Spring Valley would become the first in their families to receive their doctorates and end up in higher education? I owe it to Cesar Chavez, who inspired me to pursue my studies. That year, 1989, we were invited to meet him at San Diego State University. It was the opportunity of a lifetime for our club members, including me and my sister Claudia. We were able to meet him and gave him a club shirt. Journalist Julie Rocha captured our experience.

As I began to follow my educational journey, I came to SDSU through the Educational Opportunities Program and the leadership of Gus Chavez. I became President of MEChA in 1990 and as President worked with Risa Sneider Baron, President of the SDSU Democratic Club. We went to the Student Associates to ask for funding to bring Cesar Chavez to SDSU. To my surprise, the management of the student associates met us, eating grapes in front of the table.

For two grueling hours, our MEChistas and students of color, including our Filipino and African American brothers and sisters, enforced the rules of Robert’s order until we could get enough votes to pass the request for funding. This life-changing event reminded me of the importance of leadership, and then I ran for Vice President of Student Associates and won in 1991.

Along with Dwayne Crenshaw and Patrique Lindahl, we have inspired a diverse generation of students associated with SDSU. The 10 years from 1991 to 2001 had a lasting legacy of leaders throughout California. Without a doubt, the strength and vulnerability of an agricultural worker has inspired many of us to humbly lead and serve our families, our communities and generations to come.

As I progressed through my education from a master’s to a doctorate, I continued to serve the community with the Latina Latino and Indigenous Peoples Unity Coalition, which served as the fiscal sponsor of the annual community breakfast Cesar E. Chávez. In this position, I supported many community members who gave of their time, hoping to instill in our community and the next generation of leaders the same hope that Cesar Chavez instilled in me.

In my memories, I think back to the union I had with Andrea Fuentez, who led the San Diego County Cesar E. Chavez Memorial Committee for many years. Cesar Chavez also inspired her. She came from Fresno to attend the University of San Diego, and that’s where we formed a union and built a bridge to start the Cesar E. Chavez Community Breakfast. She ruled for many years until heaven took her wings to rest. She left many beautiful imprints in many hearts with her love for Cesar Chavez.

Most recently, at Southwestern College, I co-counseled MEChistas with their 10-point plan, which focuses on getting a Chicana and Chicano curriculum. Cesar Chavez also inspires them. They invited Dolores Huerta to come and speak and continue to inspire in each of us the struggle for the liberation and affirmation of our communities. Each year, as Co-Chair of the Southwestern College Chicana Chicano Latino Employee Coalition, I have helped raise thousands of dollars to provide scholarships promoting the vision of Cesar Chavez at the annual celebration of the little – Cesar E. Chavez lunch. We also award the annual Cesar Leadership Award, UndocuScholars, Transfer, and Career Technical.

None of this would be possible without the elders of the community who helped pave the way for me, a little chicanita and a proud fronteriza, who with their guidance continue to pave the way for many young people from all walks of life , so that they can embrace their identity, their cultural strength and the capital that their parents give them to flourish. My mission is complete when they can see in themselves all the possibilities that Cesar Chavez saw in all the campesinos, the gift of humility in the service of humanity and the strength to keep moving forward, pa’ delante.