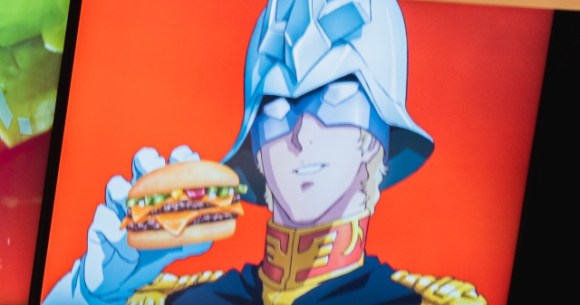 Char is taking over McDonald’s for a limited time, but are his burgers as good as he says?

Just last week, a new spokesperson for McDonald’s appeared in Japan. Usually that wouldn’t be much of a concern, but this new spokesperson wasn’t a friendly face – in fact, it wasn’t a human face at all. Instead, it was the helmeted face of one of the world’s most famous anime antagonists – Char Aznable, from the mecha anime Mobile Suit Gundam!

▼ Here it is, topping the new series of Gundam burgers, with this one playing up the spiciness of the Custom Kara Dabuchi tank.

While the entire series of four burgers includes a Personalized Dabuchi Sausage Muffinonly available on the morning menu, when our avid Gundam reporter Egawa Tasuku stopped by to try the burgers at lunch, there were three choices.

Since Egawa had already tried the Kara Dabuchi when it appeared on the menu for a limited time last year, he was eager to try the “new” burgers, which were debuting at McDonald’s for the first time. So he ordered the Teriyaki and the Torichiaccompanied by a Red Energy Flavor McFizzand took them home for a taste test.

Like Char himself, known for fighting in customized versions of standard mobile suits featured in the anime, these burgers have also been upgraded. Pulling them out of the bag revealed they were decked out in their own Char Custom Mobile Suits – Zeong for the New Type White Torichi (left) and the Gelgoog Custom Tank for the Red Garlic Teriyaki (right).

Starting with the New Type White TorichiEgawa paused for a moment to contemplate the beauty of the packaging.

Inside this mobile suit was the triple white cheeseburger, brimming with white cheddar cheese, which reminded Egawa of the color associated with series protagonist Amuro Ray. It was heavy and delicious, but if it was a battle, Amuro would probably want to curl up for a nap after eating a burger like this rather than fight Char.

▼ Next to the tasting dock we have the Teriyaki Red Garlic Custom Tank.

This new burger can be found inside the Gelgoog, the mobile suit that Char piloted before Zeong. A nod to Char’s favorite color, and nickname, “The Red Comet”, red plays a big role here, appearing in the hot sauce and coloring the burger buns.

The specifications for this burger are based on a basic teriyaki model and include smoked bacon and garlic soy sauce mayonnaise.

It was a deliciously smoky and sassy encounter, and it delivered such a kick of spice to the taste buds that Egawa was glad he bought. the red McFizz. This fizzy drink helped turn off the heat and sweeten the climax with honey and guarana berries.

Everything Egawa tasted had an impact and left him happy and satisfied, kinda like an episode of Gundamalthough this new series is coming to an end soon since it is only on the menu until the end of July.

Before the series ends, Egawa hopes to order all the burgers and head to the life-size statue of the RX-0 Unicorn Gundam in Tokyo, the RX-78-2 Gundam in Yokohama, and the RX-93ν (“Nu”) Gundam in Fukuoka, to really blur the lines between fast food and fiction!

Photos © SoraNews24
● Want to be up to date with the latest articles from SoraNews24 as soon as they are published? Follow us on Facebook and Twitter!
[ Read in Japanese ]