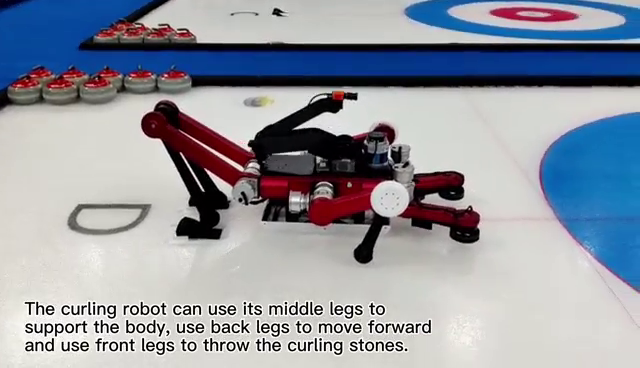 The curling robot developed by a team from Shanghai Jiao Tong University.

It was developed by a team from Shanghai Jiao Tong University.

The curling robot can use its middle feet to support its body, its rear feet to move forward, and its front feet to throw a curling stone.

It’s the world’s first six-legged curling robot that mimics human behavior by pedaling, sliding and spinning, according to the team.

After the 2018 PyeongChang Winter Olympics, wheeled curling robots appeared in the world. The fact that they are wheeled makes the throwing action different from that of a human.

“When a person throws a curling stone, one leg supports the body, the other leg pushes, the eyes are directed at the target, and the hand controls the speed and direction of the curl, which is gripping behavior. complex decision,” said Gao Feng, the head of the development team.

“Thus, the technical challenges of getting the robot to ‘think like human beings’ include how to identify the dynamic parameters of contact between the ice surface and the robot based on information measured by vision and motion sense. force. Also, how to control the behavior of the robot according to the human decision-making method to throw the stone.”

The robot can imitate the behavior of human beings throwing curling stones and has the ability of visual perception and force. It can be used as a daily training partner by curling athletes.

In addition, during the interval between curling competitions, robots can be used for performances, which adds a lot of fun to the curling competition and stimulates young people’s interest in scientific and technological innovation.