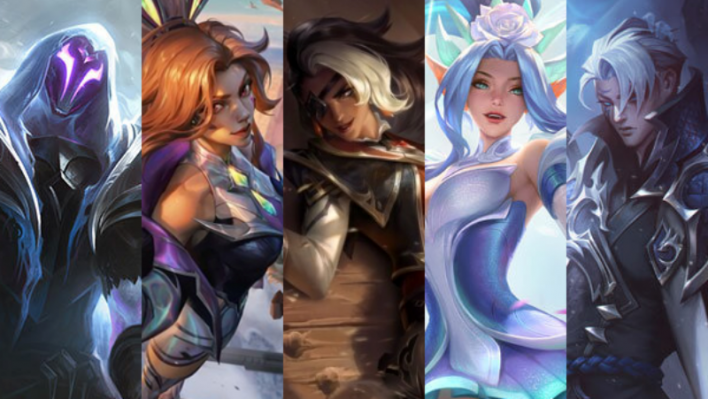 A champion skin in League of Legends has many different meanings. Not only is it an aesthetic aspect of the game that makes players see champions in a different light, but it also provides a storyline based on skinline, against other champions who may not have had previous relationships in the tradition. In addition, rare skins also have collectible value.

So what skins released in the first half of 2022 received [from January to June] most loved by gamers? We decided to compile the list of top 5 skins that Inven KR community members have rated the highest in the Inven KR skin gallery. Please note that there were skins that had the same score; in such cases, the skin with more community members voted on it was chosen.

Worlds skins are made to commemorate the team that wins Worlds each year. After Edward Gaming won Worlds in 2021, Riot released EDG Skins to celebrate their victory in 2022. Among Worlds skins, EDG Skins were praised for their polished quality and the colors used to craft them.

Among them, EDG Aphelios was ranked the highest among Aphelios skins. Created for EDG’s bot laner, Park “Viper” Do-hyeon, users can even find Viper’s signature in the splash art.

As a champion, Aphelios has that mystical theme going for him, and EDG Aphelios elevates such a theme to the next level. In terms of how he functions as a champion, he has a very unique mechanic on how he plays, so he has a bit of a ceiling. However, some users in the Inven KR community said they would buy this champion even if they don’t know how to play it.

However, the real gem of the recent Crystal/Withered Rose line of skins was Crystal Rose Janna. With a white and cyan color theme, Janna is almost depicted as a fairy, especially because of her pointy ears. From its beautiful splash art to its high quality gameplay model, this skin beat out Star Guardian Janna and Bewitched Janna to be the highest rated Janna skin in the Inven KR community.

The Crystal/Withered Rose all showed decent to excellent quality of play. The skinline will always make players think, “Which champion will be next?”

It’s been many years since the first High Noon skin was released [High Noon Twisted Fate in 2011], but it hasn’t been long since he became a skinline. The quality of these skins has improved a lot over the past few years as it really captures the Wild West theme.

Among them, High Noon Samira was very well received by the Inven KR community. Since she’s already wielding a gun like the ones you see in those old Wild West movies, there were those who were highly anticipating Samira’s collaboration with the High Noon skinline even before the skin was announced.

The orange and black visual aspect of the skill effects that makes her look like she’s burning everything is top notch. Besides that, the exorcist look which adds more appeal, as well as the lore of the skin where she opposes the machina demon, High Noon Mordekaiser, this skin is definitely one of the best Epic skin releases from 2022.

In one of the skinlines released in 2022, the Anima Squad skinline was highly anticipated even before its release due to the way the mecha aspects and cute animal aesthetics were combined.

However, Battle Bunny Miss Fortune was different. From its walking animation to the unique movement jumping animation, the overall quality of the skin lives up to expectations of a legendary skin. It’s safe to say that his skin is the best in the Anima team skin line.

According to the Inven KR community, the #1 skin for H1 2022 was “Ashen Knight Pyke”. Following the overhaul of the gem and prestige point system within League of Legends, this skin is the first Mythic Essence skin that Riot Games has released. For those who don’t know what Mythic Essence is, it’s the currency that replaced Gems and is used to buy Hextech and Prestige skins.

Ashen Knight Pyke was not only the first skin that can only be purchased with Mythic Essence, it was also only available for a short time. Naturally, this caught the attention of many people. The quality of the skin in the game was outstanding, and it was particularly appreciated for the translucent, ghostly vibe it had. Some users even praised that the skin looks like something straight out of the “Dark Souls” series.

From rarity to exceptional skin quality, Ashen Knight Pyke has quickly risen to the top of the skin that all Pyke players must have. The Inven KR community received the highest rating among all Pyke skins, beating other high-quality skins such as Project: Pyke and PsyOps Pyke.