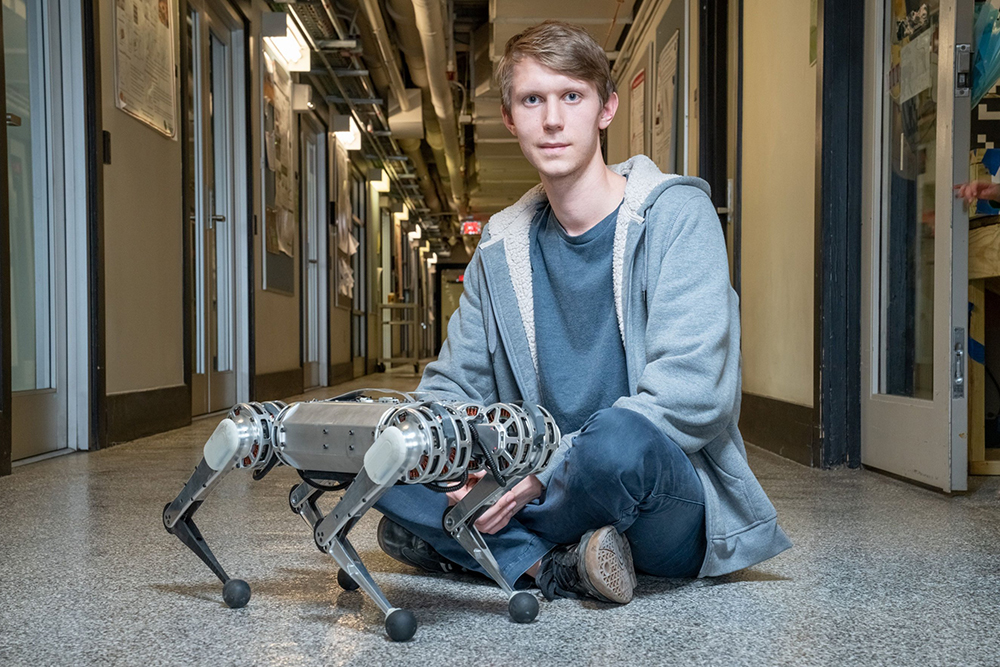 In November 2018, MIT professor Sangbae Kim brought his mini cheetah robot to the Tonight Show-botics segment of â€œThe Tonight Showâ€. Much to host Jimmy Fallon’s delight, the mini cheetah did yoga, got up after a fall, and performed a perfect backflip. Behind the scene, Benjamin Katz ’16, SM ’18 remotely controlled the cheetah’s agile maneuvers.

For Katz, waiting backstage while the robot performed in front of a nationwide audience was the culmination of nearly five years of hard work.

As an undergraduate student at MIT, Katz studied mechanical engineering, opting for the flexible Course 2A study program with a concentration in controls, instrumentation, and robotics. Towards the end of his freshman year, he emailed Kim to see if there were any job opportunities in Kim’s biomimetic robotics lab. He then spent the summer in Kim’s lab as part of MIT’s Undergraduate Research Opportunities Program (UROP). For his UROP research and undergraduate thesis, he began to examine how to use parts designed for the electronics hobby market in robotics. â€œYou can find high performance engines designed for things like airplanes and remote controlled drones. Basically I thought you could use those parts for robots as well, which nobody was doing, â€Katz recalls.

Kim was immediately impressed with Katz’s abilities as an engineer and designer.

After deciding to pursue a master’s degree in mechanical engineering at MIT, Katz continued to work in Kim’s lab and developed solutions for actuators in robotics. While working on the third iteration of Kim’s robot, known as Cheetah 3, Katz and her lab colleagues focused on developing a smaller version of the robot.

“There are a lot of good things about having a smaller robot: if something breaks you can easily fix it, it’s cheaper and it’s safe enough that a person has a fight on their own,” Katz explains. . â€œWhile a small robot isn’t always the most practical for real-world applications, its controllers, software, and research can be trivially ported to a large robot capable of carrying larger payloads. “

Drawing on her undergraduate research, Katz and the research team used 12 motors originally designed for drones to build actuators in each joint of the little quadrupedal robot that would be dubbed the “mini cheetah.”

Armed with this little robot, Katz set out to make the mini cheetah more agile and resilient. Alongside Jared Di Carlo ’19, Mng ’20, then a student at EECS, Katz focused on controls related to locomotion in the mini cheetah. In class 6.832 (Underactuated Robotics), taught by Professor Russ Tedrake, the couple worked on a project that would allow the mini cheetah to safely backflip from a squatting position.

â€œIt was basically a giant offline optimization problem for the mini cheetah to do a backflip,â€ Katz explains.

Using the offline nonlinear optimization to generate the backflip trajectory, he and Di Carlo were able to program the mini cheetah to crouch and rotate 360 â€‹â€‹degrees around an axis.

While working on the Cheetah, Katz constantly pursued other engineering projects as a hobby. This included a very different rotary robot as a pet project. Along with Di Carlo, Katz used MIT’s community creation space known as MITERS to develop a robot capable of solving a Rubik’s Cube in a record 0.38 seconds.

â€œThis project was purely for fun during MIT’s period of independent activity,â€ Katz recalls. â€œWe used custom actuators on each side of the Rubik’s Cube alongside webcams to identify the colors and move the blocks accordingly. “

He has chronicled his other favorite projects on his â€œbuild-itsâ€ blog, which has developed a strong following. The projects included planar magnetic headphones, a desktop Furuta pendulum, and an electric travel ukulele.

â€œBen was constantly building and analyzing something with our lab and classroom projects throughout his time at MIT,â€ says Kim. “His relentless desire to learn, build and analyze is quite remarkable.”

After graduating with her masters in 2018, Katz worked as a technical associate in Kim’s lab before accepting a position at Boston Dynamics in 2019.

As a designer at Boston Dynamics, Katz transitioned from cheetah robots to humanoid robots on ATLAS, a research platform billed as the “world’s most dynamic humanoid robot.” Much like the mini cheetah, ATLAS can perform incredibly dynamic maneuvers, including backflips and even parkour.

While the mini cheetah in yoga poses and ATLAS doing parkour seem like entertainment worthy of â€œThe Tonight Show,â€ Katz quickly reminds others that these robots meet a real need. Robots could one day maneuver in areas too dangerous for humans, including burning buildings and disaster areas. They could open up new possibilities for life-saving disaster relief and emergency first responders.

â€œWhat we did in Sangbae’s lab is going to help make these machines ubiquitous and really useful in the real world as viable products,â€ Katz adds.