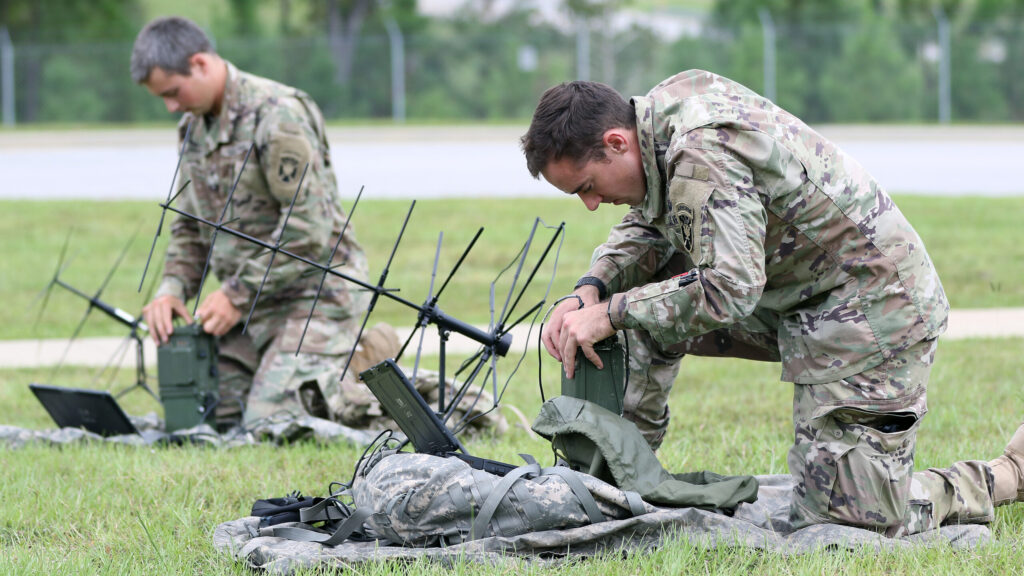 SMD 2022 — For several months, the U.S. military has been quietly experimenting with how to more closely link its Special Operations Command, Space and Missile Defense Command, and Cyber ​​Command on the battlefield under a new “triad” concept.

The goal: to better integrate the capabilities of each command to assemble more complex and effective battlefield options in a world where adversaries can operate in multiple domains at once.

The commanding generals of the three organizations revealed the concept for the first time today at the Space and Missile Defense Symposium, saying that the origin of the idea stemmed in part from the success of the fight against terrorism, in especially against the Islamic State.

“We have examples in the fight against ISIS of combining lethal and non-lethal effects for a much larger holistic effect which I would say had a greater impact than anyone had predicted before us, really synchronizing our efforts to have an effect on the adversary there,” said Lt. Gen. Jonathan Braga, commander of U.S. Army Special Operations Command.

Operations included lethal options in the physical world combined with non-lethal options, such as information warfare or cyber. An example would be “countering a message, then removing the ability to deliver even a message, provided by a holistic combination of cyber and SOF (special operations forces),” Braga said.

But as 20 years of war in the Middle East draw to a close, the military is turning to more capable adversaries in China and Russia that are far more sophisticated than terrorist groups. Braga said the nation-state threat provides more opportunities to build on space capabilities, providing what he called more “surface contact zone.”

The organizations have been experimenting with the concept together for several months. Lt. Gen. Karbler, commander of the Army’s Space and Missile Defense Command, told reporters that Project Convergence, the Army’s annual sensor-shooter test event, will include some instances of use of the triad, but did not go into detail. SMDC, he said, will provide space capabilities that will integrate special operators and cyberspace.

“That’s the beauty of the Convergence project is that it’s an opportunity to experiment with these capabilities and find out what works best for us,” Karbler said.

Over the next 12 months, the generals said they were looking for more places for experimentation, as well as operational opportunities. Karbler added that the important near-term job is to educate combatant commanders about the existence of this SOF-Space-Cyber ​​triad of the military so they know they have built-in battlefield options. , instead of a single, siled solution.

“Education is a big part of it,” Karbler said. “Then putting our money where our mouth is…showing up for exercises and making sure the added value of what the triad brings is recognized.”